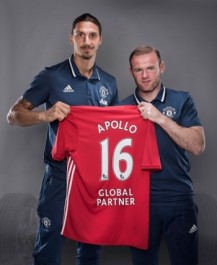 The partnership is entering a second three-year term and this time Apollo Tyres will be the Official Tyre Partner of Manchester United worldwide.

The Club initially confirmed Apollo Tyres in August 2013 as a partner in the UK and India. Since then the partnership has been extended to more than 100 countries across Asia, the Middle East and Africa.

A highlight of the partnership so far has been the ‘Go the Distance’ Scholarship Programme, which included a football camp in India supported by Manchester United Soccer Schools.

Recognising however the importance of a physical legacy, Apollo Tyres has also developed two ‘Go the Distance’ football pitches; the first outside Old Trafford, under the watchful eye of Sir Alex Ferguson’s statue, and the second in Powai, Mumbai. Each pitch is made of recycled tyre rubber and provides a sustainable contribution to the local community, bringing football to children.

Another achievement has been the special-edition dual-branded tyre in India, the Middle East, South East Asia and the United Kingdom. Loyalty schemes built around the partnership have also helped Apollo’s expansion.

The partnership has contributed to Apollo campaigns such as ‘Apollo Challenges’ and ‘No Shortcuts’, which was complemented by a multi-channel advertising campaign as well as digital engagement with consumers.

“Over the past three years, we’ve been impressed with how Apollo has taken opportunities after partnering with us. The company has supported our international events, especially in India. It has helped empower communities during its growth, and has been able to see first-hand what can be achieved when working with us. That has included greater exposure of Apollo’s brand.

“Taking this partnership to more countries has enabled Apollo to broaden its range of consumers, and it has worked hard to engage compellingly with these new audiences. I’m delighted to say that today this journey has reached its natural conclusion with Apollo joining our family of global partners.”

“The three-year association with Manchester United has supported our business expansion plans especially in India, Middle East, South East Asia and Africa. Our various campaigns have helped us connect with young people, increasing awareness of brand Apollo and customer acquisitions in these regions.

“We believe that the global partnership will further help us position our brand and the products in the minds of consumers across geographies, in addition to being visible to the 659 million fans of the club.”